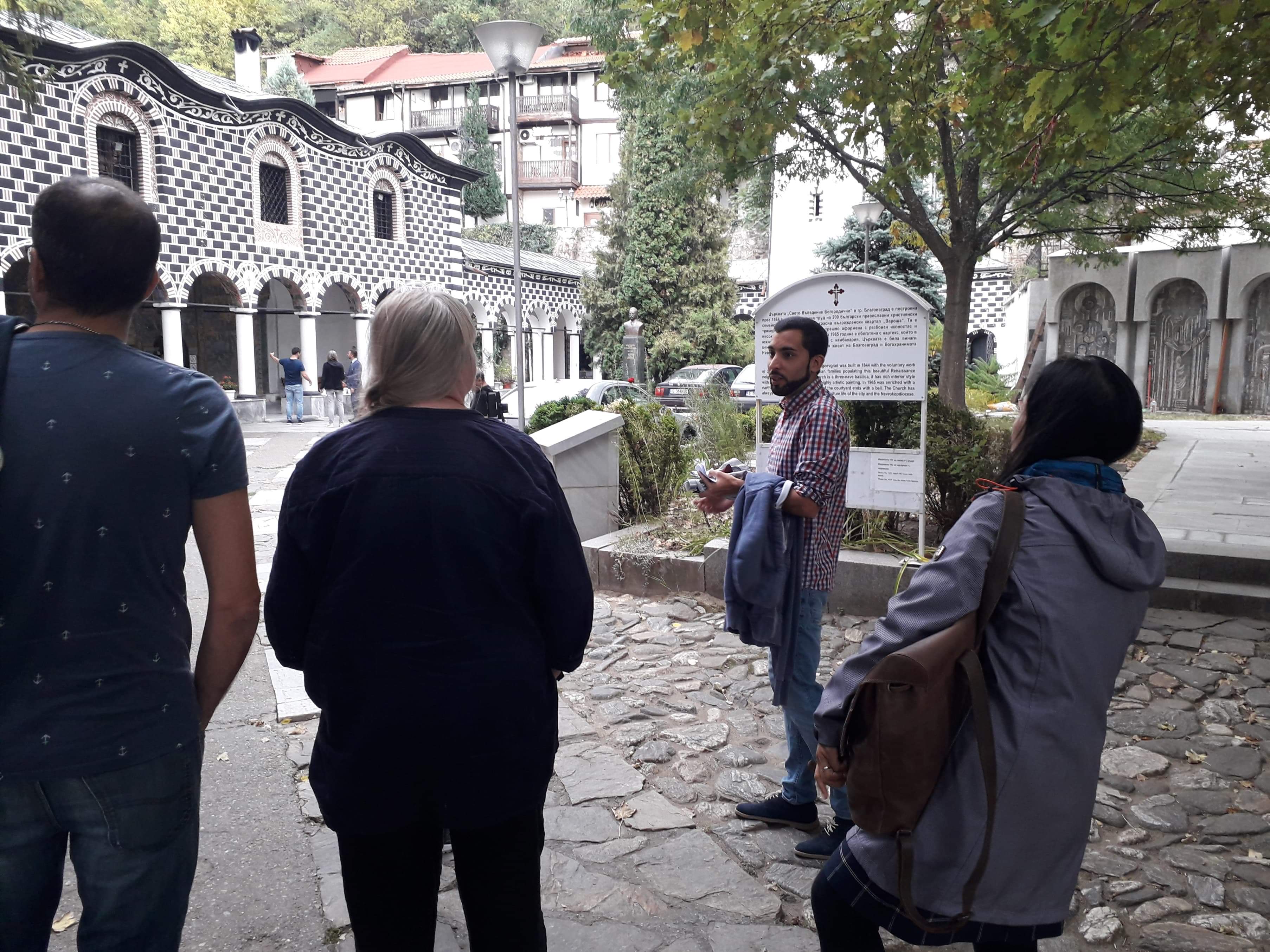 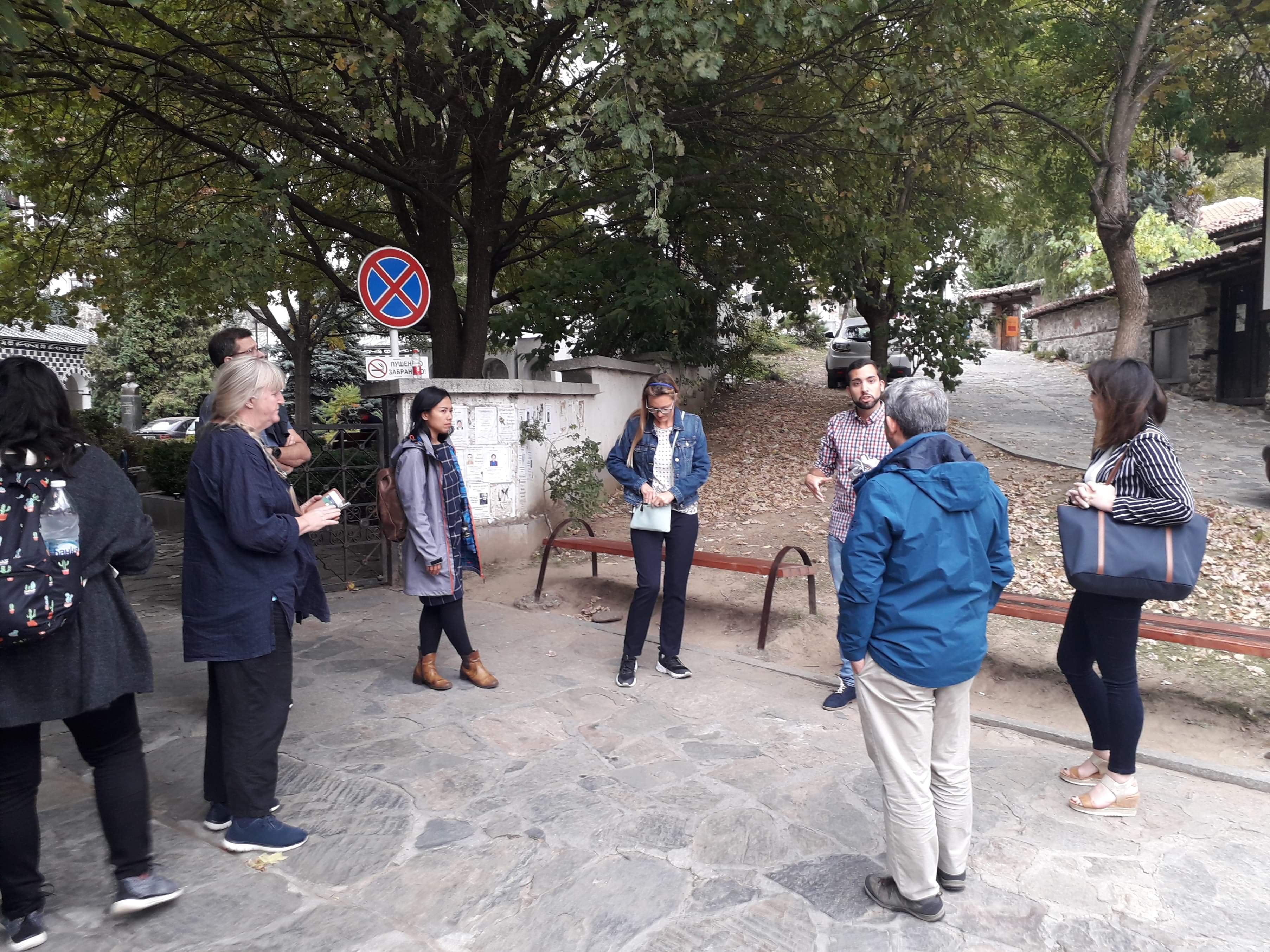 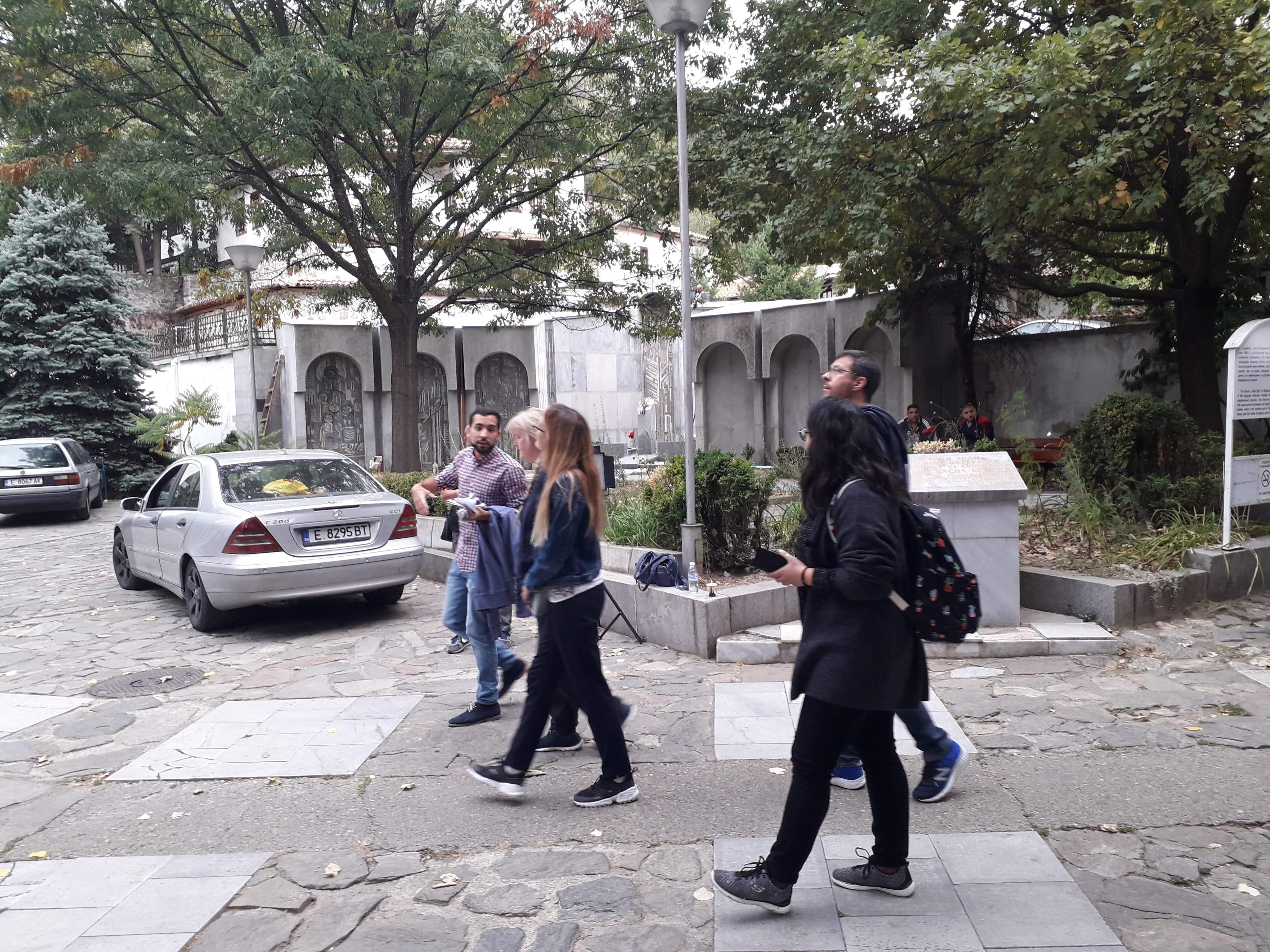 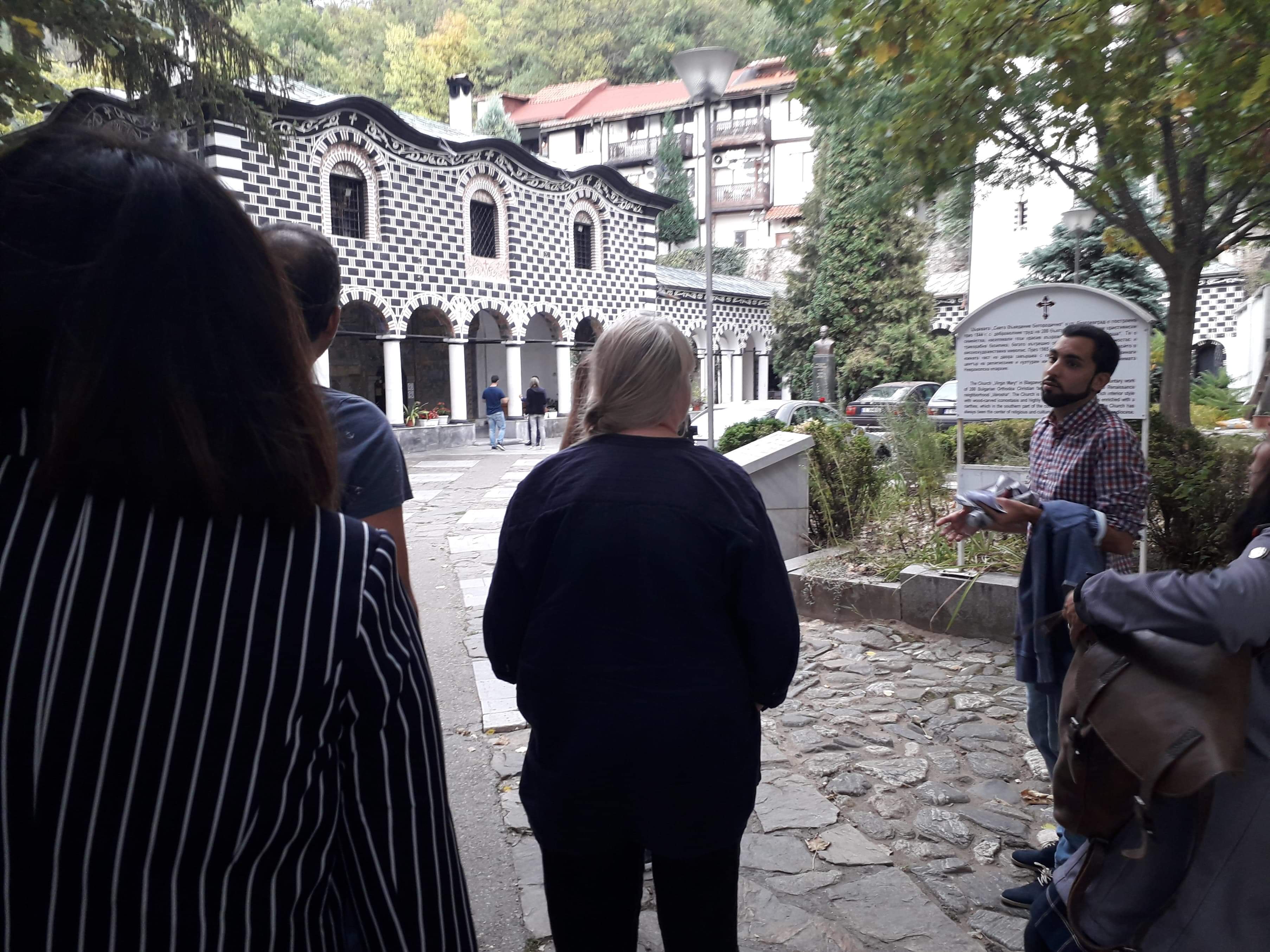 On Thursday 3rd October, I had the opportunity to do a walking tour in Blagoevgrad. The Association Euni Partners organized a project meeting within a project  ‘’Connected Learning’’ and they have different partners from the United Kingdom, Italy, Germany, Cyprus, Sweden, and Bulgaria. I was their tour guide on this occasion!

I decided to do a walking tour because it was my personal project. I studied Tourism and I am official touristic guide. Then, it was a good occasion to show them all my experience in this kind of project. I wanted to do it because I love sharing my knowledge about heritage of this city.

Almost 1 year of living in this fantastic city, I can feel really lucky because I know very well the city. Then, it started at 5:00 PM in the church ‘’Vavedenie Bogorodichno’’. It is exactly in the center of the quarter ‘’Varosha’’. It was built to replace an older and smaller church that was a convent of the Rila monastery. With its construction, the Bulgarians expressed their increased religious consciousness and national economic affluence. One of the most interesting compositions in the church is ‘’Wheel of life’’ in the open gallery. Nowadays, the church is a national monument.

After that, I was explaining them a little bit about Varosha and the Museum. Then, Varosha was formed as a quarter of the Christian population in the city at the end of the seventeenth century, then Bulgarians from the surrounding villages, dealing with crafts and trade, settled in it, build small houses and living in peace with the Turks. By mid-nineteenth century began to build larger, two-stores houses with typical planning scheme for the revival construction period – with business premises on the ground floor and residential – in the second.

Finally, I showed them the Historical Museum that is directly connected to the neighborhood’s western part. The museum has an exhibition that presents the history of the southwestern Bulgarian lands from the VII century BC until today. The interesting thing about it is the coin hoard of the unknown Thracian tribe of the V-IV century BC. In the museum there is an exposition, presenting the national liberation struggles of the population of the Kirin region, supported by data on socio-economic development during this period and educational activities.

I decided to go to the Bridge, near to Largo Mall, where you can find the town symbol of the city.  The history is: a man from Gradevo village has once lost his horse. After days of searching for it he found it during winter, strong and well-fed, with its’ mane shining. He almost couldn’t recognize it! The horse was busy with grazing, and next to it there was steam coming out from the ground. Not so long afterwards the man moved to Blagoevgrad with his whole family. This is why there is a horse standing next to a mineral spring on the town’s symbol. The author of the symbol is Christo Barakovski.

Unfortunately, we weren’t lucky with weather, because it started to rain.. But, I wanted to keep on with the tour and with umbrellas everything is possible! The next stop was the Macedonian Square.

On the Macedonia Square or ‘’old square’’ is placed monument of Gotse Delchev. Its sculptor was Krum Dermendjiev. It is made during 1955. The figure of Gotse Delchev is a full-length with haidouk clothing. He was an important Bulgarian revolutionary figure in Ottoman-ruled Macedonia and Thrace at the turn of the 20th century.

We are in the end of my walking tour and the last stop was the new Square ‘’G. Izmirliev – Makedoncheto’’. It was formed in 1985 to 87 years, regarding to the visit of the diplomatic corps. It was formed by the buildings of the Municipality of Blagoevgrad, theater ‘’Nikola Vaptsarov’’, the AUBG, SWU ‘’Neofit Rilski’’, the Regional Library and by the post office.

I finished my tour explaining the history of Dimitar Blagoev. He was a Bulgarian political leader, the founder of Bulgarian socialism and one of the first social democratic party in the Balkans. Thus,the name of Blagoevgrad is for him. The Blagoev’s City! The slavic suffix ‘’-grad’’ means city and Blago means ‘’sweet’’. For sure I can say that Blagoevgrad is a really sweet city for its food and the people.

In general, it was a wonderful experience and maybe in a future, I will repeat it…who knows?